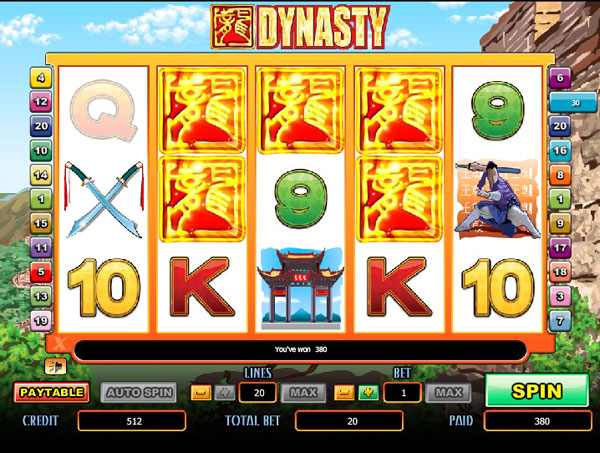 Both of these online slot games, Call of the Colosseum and Dynasty are themed on ancient history and are being offered through the Microgaming QuickFire platform.

The 20 pay line video slot, Call of the Colosseum, is themed on ancient history and takes players back to the Roman Empire.  The symbols include a chariot, a bag of gold, the Colosseum, a Roman lady and a gladiator’s helmet.  The Roman lady offers players a fixed jackpot payout of 5,000 coins.  The emperor, who appears only on reels 2, 3 and 4 is the wild symbol.  The round shield is the scatter symbol and when three or more appear on the reels it will activate the free spins feature.  Ten free spins are awarded to players with all payouts doubled.  A “thumbs up” sign made by the emperor who appears during the free spins results in three or more free spins being awarded.

Dynasty is a 20 pay line slot game set in the background of the Great Wall of China.  The Dynasty logo is the wild symbol appearing on reels 2, 3 and 4 only and if appearing stacked it will enhance the payout potential.  The emperor is the scatter symbol and three or more appearing on the reels awards 10 free spins with doubled payouts.