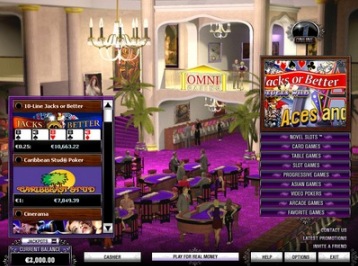 Omni Casino has announced via the Omni Times that the casino has released the first three of many new games.  Omni Casino will also release many new deposit options and will soon host its largest slots tournament.

A scratch card based on Omni Casinos’s popular online slot Iron Man 2 is one of the games that has been released and has a top prize of $1 million on a $ 100 wager.  The Iron Man 2 Scratch game requires players to get three reactors in a line.

Frankie’s Fantastic 7 is the second new game released at Omni Casino.  This arcade horse racing game features the nags driven by random card draws from a deck during which time the punters try their luck at a number of bets.

The third new game at Omni Casino is a six deck blackjack variant titled Perfect Blackjack.  This game is played with Las Vegas strip rules though players can also bet on the dealer or the player, or both, having a pair.

The progressive jackpots at Omni Casino have been rising with Beach Life just breaching the $ 2 mark.  A statement in the Omni Times reads "It's a 20-line game with a $0.50 coin bet. If you have not played Beach life, you might want to give it a try…it could change your life!"

Omni Casino is powered by software from Playtech and licensed in the gambling jurisdiction of Curacao.