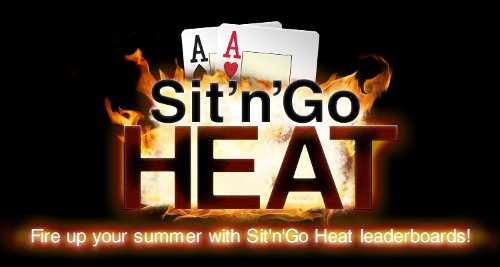 A special sit-and-go tournaments has recently been launched at TitanPoker.com that will award players with more than $105,000 in prize money between now and the end of June, 2011.”

The Sit ‘N” Go Heat promotion commenced at TitanPoker.com last Wednesday and consists of a pair of bi-weekly leader-board races where players will be ranked based on their performances.

Four of the Sit “N” Go Heat leader-boards will be categorized by tournament buy-in-levels during each race period. The fifth will, however, be reserved for those players who prefer heads-up sit-and-go tournament action.

Antiqua-licensed TitanPoker.com stated that participants in this tournament will be ranked based on a formula that will take into consideration the buy-in amount as well as the number of players participating in each tournament.  Players’ can check their standing at TitanPoker.com knowing that the more tournaments they play the higher they will rank.

Participants in this tournament will be eligible to win prizes in more than one of the leader-board races. Those players who finish in a “bubble” position just missing a cash award will be invited to participate in a special $2,000 free-roll tournament.

A statement from TitanPoker.com read “Online poker novices and veteran poker players alike are invited to try out the free poker download and win their share of the prize money in TitanPoker.com’s Sit ‘N’ Go Heat promotion.”