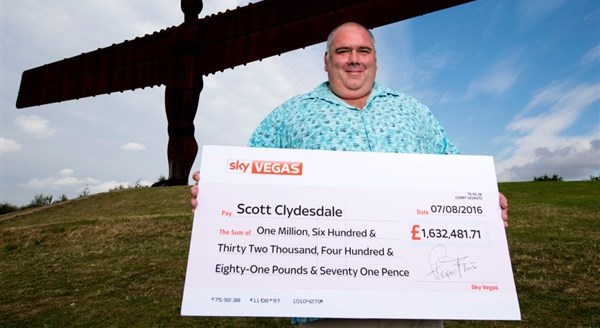 Sky Vegas Casino is thrilled to announce that a lucky punter hit it big at the online casino recently while wagering on the Blueprint Gaming Toy Factory slot game which resulted in him taking home a massive prize of £1.5 million.

The lucky player, Scott Clydesdale who hails from Durham in the United Kingdom, is a 40 year old builder who played the Toy Factory slot game for a period of 23 minutes, notching 125 spins during that time. Clydesdale managed to hit it repeatedly during play, taking home the massive prize of £1.6 million at the end of the day.

The lucky winner revealed that he intends using his winnings in order to pay for his wedding that is due to take place next year and is also planning on taking a vacation outside the United Kingdom as this will be the first time ever that he will have left the country.