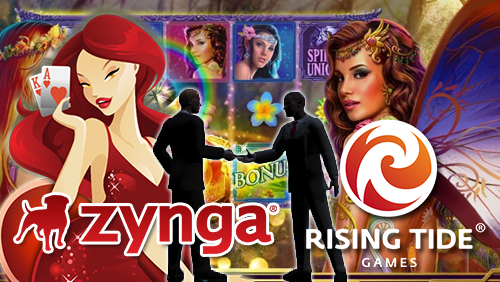 Zynga has recently revealed that it has entered into a deal which will see it acquiring social gaming specialist Rising Tide Games in an endeavor to enhance it social casino offering.

Founded by former Zynga and Playtika executives, Rising Tide Games was founded in an attempt to develop free to play social games such as its social slot “Black Diamond Casino”.

Although the terms of the deal have not yet been disclosed, Zynga has revealed that the acquisition will assist them in strengthening its commitment to social casino which is a strategy it began by purchasing Spooky Cool Labs in 2013.  This has led to the company already having a large social casino slots business with its social slots franchise bookings growing by a whopping amount of 264% between the second quarter of 2014 and the second quarter of this year.

It is presumed that this year the social casino game market will be worth approximately $3.5 billion and is expected to grow by 15% to $4 billion in 2016.

Mark Pincus, the founder of Zynga who returned to replace CEO Don Mattrick last April commented on the new acquisition by saying that the company is excited to welcome the “deeply talented” Rising Tide Games.  Pincus added that Zynga already has a long history in social casino games and pointed out that Zynga Poker remains the world’s largest free poker game.