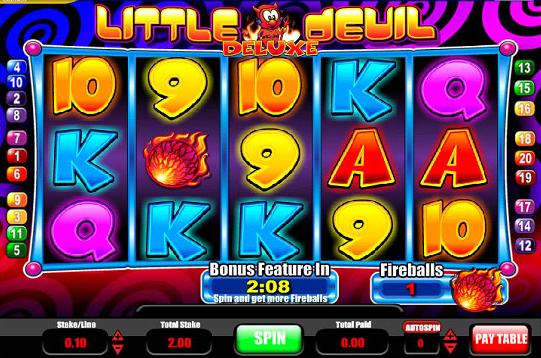 Players will enjoy a Fireball Feature in the Little Devil Deluxe slot game with a timer counting down when the fireball symbol appears on the reels. More fireballs can be collected to use in the feature during the count down and when the counter reaches zero it will trigger the Fireball Feature. Clicking the Fire button will initiate the game on the second screen. Fireballs are shot into a pocket with a specified multiplier that is applied to the total bet of the spin in which the fireball was earned.

The Little Devil Deluxe slot game also offers a Pick A Devil Feature which is a free spins round. Players have a chance to pick a devil to reveal the number of free spins should three or more of these appear on the reels. The free spins, that can be retriggered, triples all wins and fireballs.

A new section of the Slota Money promotion was entered by Virgin Casino on Monday, June 11 and will run until Thursday, June 14. Players are offered a total prize pool of GBP 350,000 which will be shared by 5,835 players in this promotion.

Golden Staircase, which is a new promotion, is also currently running at Virgin Casino and will continue until June 15.