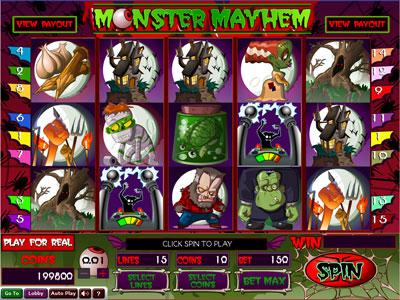 The new 50 pay-line slot game features two beasts namely Smash, who appears only on reel 1 and Crash who appears only on reel 5.
Both beasts are wild symbols that substitute even for the scatter symbol.  Two times the line bet is paid by Smash each time he makes an appearance and both beasts celebrate with violent gestures and grotesque sounds whe they make winning combinations.

The scatter symbol is the City, three or more of which appearing anywhere on the reels offer scatter payouts.

Monster Mayhem is a very interesting slot game as it uses all thematic symbols a few of which offering large fixed jackpots.  A jackpot payout of 2,500 coins is offered with the Monster Footprint while the Frightened Lady offers a jackpot payout of 1,250 coins.