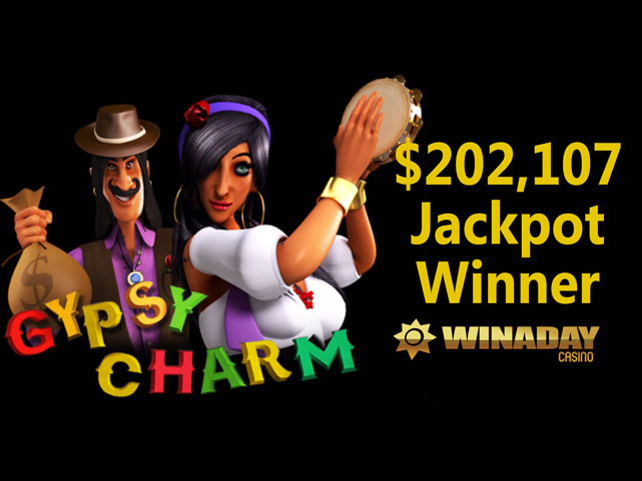 WinADay Casino has revealed that a lucky punter at the site managed to hit a massive progressive jackpot wagering on its Gypsy Charm slot game a couple of nights ago.

The lucky winner, known only as Donald T, is an ex-military officer who later became a high school teacher. Donald won an amount of $202,107 by hitting the progressive jackpot while wagering on the Gypsy Charm slot game after five Gypsy Dancer symbols appeared on the screen.

When interviewed by a WinADay customer service representative, Donald said that he had won a few hundred dollars here and there on the computer and also in Vegas but that he has never been this lucky before.

Donald was playing the Gypsy Charm slot from his iPad when he hit the progressive jackpot on the game.  He intends buying a new home and paying for his wife’s surgery with a portion of his win and also has a special gift in mind for his son who had given him a gift card for his birthday that resulted in his massive win.  Donald will be sending his son a special thank you card together with tickets for a cruise to the Caribbean.

Gypsy Charm has a Fortune Teller bonus game where players can choose Tarot cards to reveal prizes.  When Free Spins are triggered in the slot game, one entire wheel becomes Wild and increases winning combinations.

The slot game is one of WinADays 32 popular slot games.