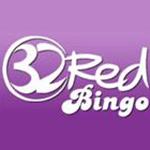 32Red Bingo has announced some new promotions for this month.

The Share of Love Week promotion is due to take place from February 13 to February 19 in celebration of Valentine’s Day. Every bingo win made during the period of this promotion on particular promotion games will award players with an extra pound over and above the normal payout.

The online bingo site is also running a Full House Week promotion from February 20 to February 29. Players will be awarded with an additional bingo bonus of GBP 3 if they get a “full house” within bonanza games during this promotion.

32Red is also running a GBP 1,500 Mega Pot in a huge bingo game due to take place on Friday, February 24th. One ticket for the game will be awarded to players for each GBP 20 deposited by them with an extra ticket given for each additional GBP 20 wagered.

Players wishing to participate in the Share the Love Week and Full House Week must be depositing players who do not have active duplicate accounts.

32Red Bingo was founded in 2002 and is part of 32Red – an industry leader in online gambling based in Gibraltar.  Players are offered a huge range of slot and scratch games as well as Bingo games at 32Red Bingo.