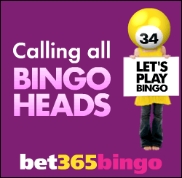 One of the world’s largest online gambling groups, Bet365 Bingo, has announced that it is running two new promotions at the site titled 7-7-7th Heaven and Community Night.

The first promotion, 7-7-7th Heaven commenced on February 6 and runs until Sunday, February 12 giving participating players who wager GBP 25 on a jackpot slot game selected by the online casino a GBP 5 bonus in addition to any amount won by them. The featured game for Sunday, February 12 is Big Top Tombola which gives players an opportunity to win a jackpot of GBP 1.6 million.

Bet365 Bingo will also be holding a Community Night at the site commencing at 18.00 UK time on Sunday, February 12 in the Island Hoper Room. Players can purchase tickets at a cost of between 1p to 50p and are guaranteed at least GBP 30,000 in prizes as well as a huge selection of games which include Last Chance Saloon, 1TG, 2TG as well as 1p Bingo games.

Bet365 Bingo is an online bingo room that was established in 2008. The site uses Virtue Fusion software and operates using the traditional UK and Spanish 90, 80 Ball Bingo as well as the growing Swedish 75 ball game.

The online casino is owned by the respected and trusted Bet365 Group.