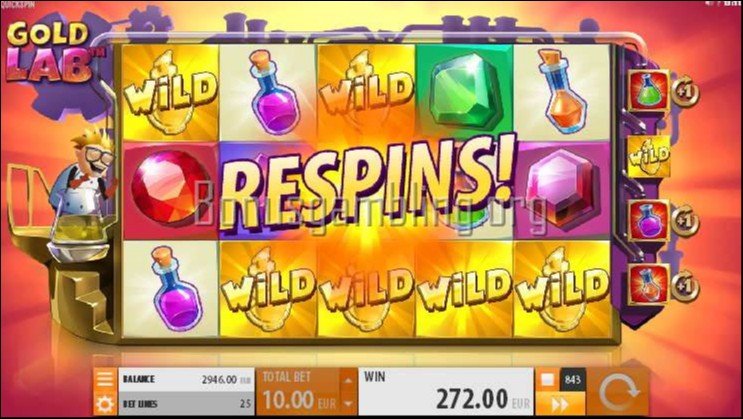 Leading Swedish developer Quickspin, has revealed that it has released its latest slot game titled Gold Lab at a number of online gaming sites that include Unibet Casino, Video Slots Casino and Bet Victor Casino.

Gold Lab is a 5 reel and 25 pay line slot game that is based on a Cartoon Scientist and his inventions and is available on desktop as well as mobile platforms.

Symbols on the reels of the Gold Labs slot game include images of gemstones such as emeralds and rubies while the higher paying symbols are made up of beakers of chemicals. The winning lines are competed by a gold-colored Wild symbol while a Golden Bonus symbol triggers the main feature of the slot game.

Players are awarded 4 re-spins when the Scatter symbol lands on Reels 1, 3 and 5 during which the Beaker symbol transforms into additional Wilds.  An additional Beaker will turn wild and another re-spin will be awarded each time another Golden Bonus Scatter symbol appears on the reels.

Daniel Lindberg, the Chief Executive Officer of Quickspin, commented on the new release by saying that they are particularly proud of Gold Lab which is a title that they are sure will prove popular among Quickspin’s loyal fanbase.