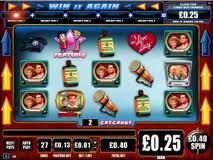 A new exciting slot game that features the actress and comedian Lucille Ball is being offered exclusively at Jackpot Party Online Casino.

The new slot features a Cascading Reels game in which winning symbols disappear and the symbols above them drop down to take their place. The game also offers the WIN IT AGAIN feature giving players an opportunity to win the combined total of their last five wins with three cascades in one play.

Players also have a chance to join Lucy in the Pick A Clip feature offered with this new slot game which gives them the opportunity to watch classic scenes from Lucy’s television program. The more that players see of this clip, the more credit awards will be won by them and in order to celebrate, players get a chance to watch the completed scenes play out.

Jackpot Party Online Casino players are also given the opportunity to win the fantastic Jackpot Party Progressive that is the only accumulating jackpot online that can be won by players on any game, at any time and with any stake.

The I Love Lucy TV series ran on US television for 6 years from 1951 to 1957 and four of its first six seasons was the most watched show in the United States.