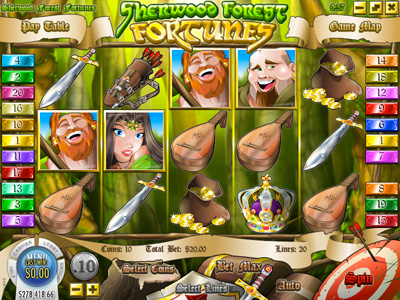 Sherwood Forest Fortunes is based on the story of Robin Hood and all the characters from this saga are featured on the reels of the slot game.  Players will find Robin Hood, John Little, King John, Friar Tuck and the Sheriff of Nottingham as well as the crown, the gold bag, the flute and the quiver on the reels.

The Wild Symbol is Robin Hood and appears on reels 1, 3 and 5 only.

Maid Marian is the Scatter Symbol that triggers the free spins bonus when three or more of these symbols appear anywhere on the reels.

The second screen in this slot game features three different bonus games, namely The Target Practice Bonus Round, the Steal from the Rich Bonus Round and the Sheriff’s Duel Bonus Round.