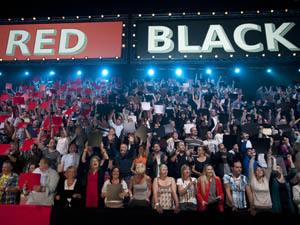 ITV has signed a deal with Gamesys, the online gambling company, in terms of which it will produce a range of free and paid-for games which are based on Simon Cowell’s primetime show Red or Black, giving contestants a chance to win £1m on the spin of a wheel.

These games will not be available through ITV.com and will be promoted with a TV ad campaign costing from 5p to 50p to play.

The co-producers of the show, namely ITV and Cowell’s Syco, originally tried to negotiate a deal with Camelot, which runs the National Lottery, but failed to do so.

In order to create a play-along experience to go with Red or Black ITV has also struck a deal with Monterosa, a company that specializes in social TV.

Denise O’Donoghue, managing director of ITV Studios UK, said “A primetime production of the scale of Red or Black has a huge amount of potential off air”.  She added that working with Syco they have been exploring the best opportunities to fully exploit this fantastic program idea.”

According to ITV "It made commercial sense to license the brand to market leaders, who run the UK’s leading gaming website.  ITV.com has strong plans to support Red or Black which includes the play-along game”.