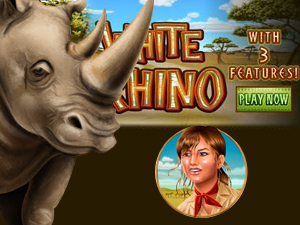 Grande Vegas Online Casino has announced that just a couple of hours after unveiling its new White Rhino safari-themed slot machine, one lucky player won over $11,000 wagering on the game from a small deposit of $16.  This lucky win has resulted in many players flocking to Grande Vegas Online Casino in order to wager on the White Rhino slot machine.

The Real Time Gaming powered online casino is running a promotion where the top prize is an all expenses paid trip for the winner to see white rhinos in their natural environment.

The lucky French player, Gilles R, hit the jackpot on White Rhino after reading about the great new game in a promotion at Grande Vegas online casino.   Gilles R began the game with $2.50 and then increased his wager to $16.

Gillis R managed to win $33,450 through the Guild Feature on the White Rhino which awards players ten free games with the option to triple all winnings.  He then won payouts of $5,900 playing the White Rhino Feature followed by more wins playing the Kilimanjaro Re-spin.

This lucky player could still find himself face to face with a real White Rhino as the promotion at Grande Vegas is giving every player that bets on the new White Rhino game until June 30 an opportunity to win an exclusive all expenses paid safari trip by automatically entering their name in a free contest.