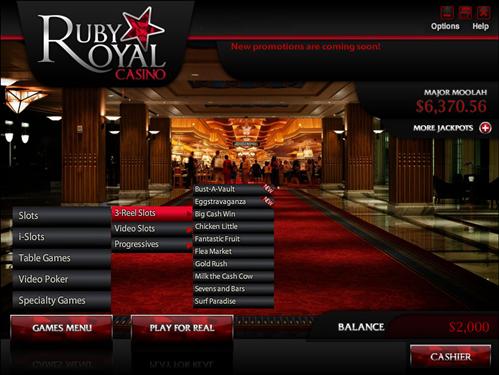 Three reel classic slot games have, surprisingly, been very popular at Ruby Royal online casino lately, judging by the number of players who have won while wagering on these games.

One lucky player from France, using the pseudonym NV, is obviously fond of these three reels slots as he managed to win €1,990 wagering on the slot game Big Cash Win on June 8 followed by an even bigger payout of €4,485 on Bust A Vault on June 13.

Big Cash Win is a single pay-line slot game featuring the usual slots symbols such as bars, sevens and cherries.  Players get to feel as if they are in a live casino due to the sound of the casino crowd and slot machines spinning that can be heard in the background during this game.

Another player from France, using the alias AB also had a lucky win of €2,985 on June 14 while wagering on the slot game Sevens & Bars.

Wagering on video slots is also very popular at Ruby Royal online casino with DP from France striking it lucky on June 5 and winning €1,631 wagering on the video slot Ocean Treasure.