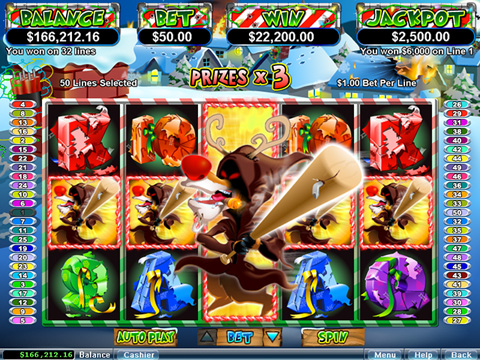 A lucky Jackpot Capital online casino player, known as “susierom1955” is in a celebratory mood this week and will actually be celebrating Christmas early this year thanks to a $10,544.22 jackpot win playing the Christmas-themed online slot machine, Return of Rudolph.

The lucky winner, from North Carolina, had placed a small bet of only fifty cents before hitting the jackpot and revealed from her home in Winston-Salem that this summer is going to be just like Christmas around her home with gifts for everyone.  She is thinking of taking everyone away and will roast a turkey.  She was also thinking of putting up a Christmas tree but later decided against it.

The fourth in a series of Santa vs. Rudolph slot machines offered by the Jackpot Capital online casino, the Return of Rudolph is a colorful 5-reel 50 pay-line game that offers players a few exciting bonus round games built into it.  Rudolph and his buddy are the Scattered Thugs and up to 20 times the total bet is paid out in the event of there being three or four in any position.  Players are required to choose one in order to enter one of three bonus games.

Jackpot Capital manager Oliver Smith revealed that although Rudolph is usually only popular in December they are thrilled that their winner found the game among their three hundred plus games.  They are happy to wish her a Merry Christmas even though it is only May.