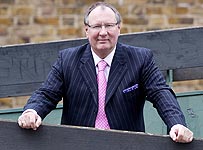 Betfred has appointed Phil Siers to replace the outgoing Managing Director of the independent land based and online bookie Jason Brautigam as from April 1, 2012.

Jason will be leaving his post at the end of March to pursue other interests after having been with Betfred for over seven years.

According to Trevor Beaumont, Chief Executive Officer for Betfred, “Jason had made known his intention some time ago to step down from his role at the end of the financial year. He has done an excellent job during his time with Totepool and I know he will continue to do so to ensure a seamless transition. Jason’s immense knowledge of how the Tote operates in all of its facets has been invaluable in helping to manage the integration with Betfred post-sale and we wish him all the best for the future.”

Jason commented that “I have thoroughly enjoyed working at the Tote but after seven and a half years the time is now right to pursue new challenges in my career. I leave the business in very good health with an excellent team in place to deliver the new strategy for Totepool under Betfred ownership and wish them every success in the future.”