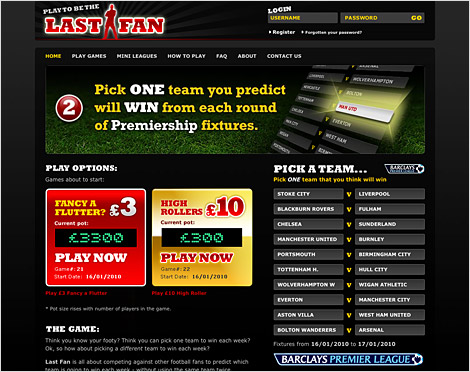 A new football betting service, described as a mini fantasy football style game, has been introduced by LastFan.com and promises to become a big hit among UK footie fans. Players essentially pay anything between £3 and £10 to enter the pool on a weekly basis and predict which team will win. Correct predictions push the player through the next round, with the last player standing taking the pot home.

“There are lots of prediction games around but the chances of winning them are small,” said David Murphy, speaking for LastFan. “We wanted to provide a real pot that is won by fans testing their football knowledge against each other.

“We know it works – we know people already play this way in offices across the country;” said Murphy, “we’ve just put it online so that you can either play in a larger game for a bigger pot, or you can set up your own game to test your mettle against your mates.”

The service, which is already familiar to those who join their co-workers in weekly football pools, is quick and requires practically no effort. Nevertheless, the rewards are good and players stand a good chance of winning the top prize.

LastFan.com is a subsidiary of Online Predictions Limited, which enjoys the licensing and regulation status of the UK Gambling Commission.