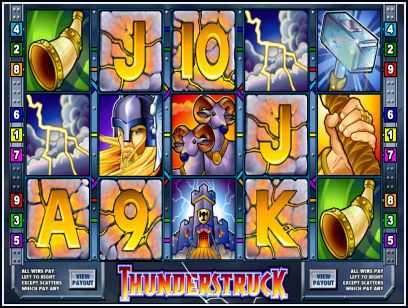 For those who have never had the honor of trying out the fantastic Thunderstruck slot game at online casinos, now is the perfect time. Ladbrokes Casino is running an attractive promotion this month, giving players the chance to enjoy the five reel, 9 pay line game, as well as the opportunity to win daily cash prizes.

Ladbrokes Casino is giving 20 players a day prizes from a £400 prize pool, with the promotion beginning each day anew!

Thunderstruck became an instant hit when it was introduced to the industry several years ago, yet remains a constant favorite among players who love the 45 coin offering with its great graphics, animations and sound effects. The game boasts lots of bonus features to increase the entertainment factor, including wilds, scatters, multipliers and plenty more.

Players can also increase their winnings through free spins and an exciting gamble feature.

To stand in line to win part of the daily £400 prize, players need to deposit £20 into their Ladbrokes Casino accounts and turnover over another £20 on Thunderstruck during the month of March. They are then put into a daily draw and if they are lucky enough to win, their accounts will be credited with a cash prize within 48 hours.