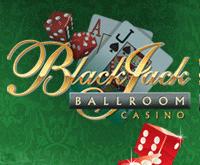 Blackjack Ballroom is currently running a great new promotion at the site, titled The Rock the Boat promotion.

The promotion commenced on Saturday, December 10 and will run until Thursday, December 15th and Blackjack Ballroom has designated the classic three reel slot titled Rock the Boat for this promotion.

Blackjack Ballroom’s invitation to the promotion reads “If Elvis were still with us, we are sure that he would love this game as much as he loved his fried peanut butter sandwiches” and Elvis fans at the casino are bound to be attracted to this promotion.

The winning symbol which also acts as a multiplier in the Rock the Boat slot is a replica of Elvis and players hear an Elvis speech and song effect when it appears on the reels. One single Elvis symbol results in the payout being doubled and two Elvis symbols result in the payout of any combination completed being quadrupled. If one coin was wagered then the jackpot of 800 coins is paid out by three Elvis symbols and two coins wagered results in 1,600 coins being paid out.

Each day during the promotion the top five wagerers on the Rock the Boat video slot game will see the amount of $100 being deposited into their Blackjack Ballroom online casino accounts.