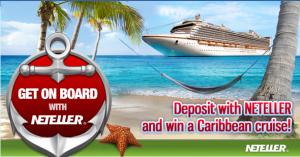 Platinum Play and NETELLER are currently offering players a chance to win a luxury seven-day Caribbean cruise for two.

Players who wish to try their luck at being entered into the lucky draw for this fabulous prize that includes flights and local transfers are required to make a deposit at Platinum Play Online Casino between now and 13th January 2012 using NETELLER.

The lucky winner of the Caribbean cruise for two will be announced on Wednesday, 27th January, 2012 and players without a NETELLER account must create one in order to participate in this appealing competition.

The online casino is powered by software from Microgaming and players are offered a selection of over 200 classic online games and progressive jackpots as well as table games such as Craps, Roulette and Blackjack.

NETELLER is a payment processor based in the Isle of Man and regulated in the United Kingdom.