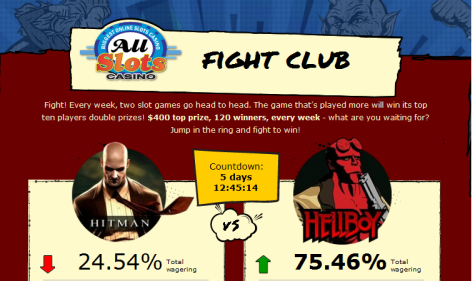 Microgaming powered All Slots online casino is running a fun-filled promotion that began at the site on 1st August and will continue until 1st October, 2011.

Two slot games are chosen by All Slots Casino every week that will go head to head and the top ten players on the game that has been played the most get a chance to win double prizes.

Each week players will get a chance to start afresh and 120 players will win prizes during the period of the promotion.

Players are required to wager 100 credits or more on one of the two participating games during that week in order to qualify for the Fight Club Promotion and bonus prizes will be awarded to the top ten players on either of the games with the 50 runners up on each game being awarded with 20 free spins.

This week’s round commenced on 13th August and continues until 20th August with Isis fans going head to head with Thunderstruck ll.