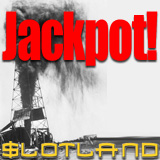 There is one retired grandmother walking around with an edge to edge smile these days after winning a huge progressive jackpot at an online casino. The online player, who is only known as QAZMLP won a whopping amount of $175,812 while playing one of Slotland’s most sought after games.

Until about five years ago, this keen slots player regularly frequented the casinos in Las Vegas but as she got older she felt very uncomfortable with all the noise and music blasting around her. She has since been enjoying playing Slotland’s online games in the comfort and convenience of her own home.

QAZMLP was lucky from the very start of the night of her big win. She was dealt a Full House in the first round and after starting with small bets decided to increase her bets. She ended up with a straight, 3 of a kind (twice), a dead hand and a beautiful four of a kind and realized that she was enjoying the best winning streak that she had ever had at Slotland. However, she had no idea that by the time the night was over she would end up with over $177,000.

After paying off the last $30,000 owing on her house, QAZMLP intends taking herself off on a trip to Japan via Hawaii. She also intends filling each of her seven grandchildren’s wallets with ten $100 bills for Christmas.

Slotland.com offers instant play casino games so there is nothing to download or install with six of their most popular games being available on mobile phones and PDAs.