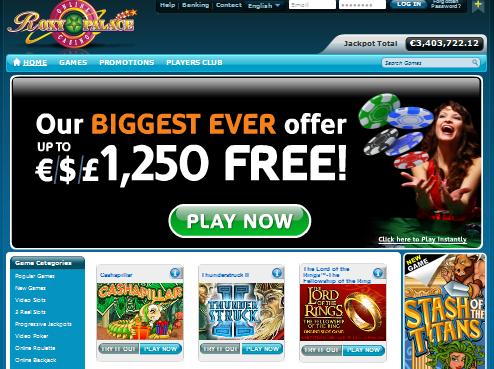 Roxy Palace Online Casino has announced a huge win of EURO 24,531 by a lucky player wagering on the online slot game Great Griffin on Monday, February 13, 2012.  The online casino also reported that since the launch of this popular slot game by Microgaming earlier this month there have been numerous smaller wins by players.

Great Griffin is a 5x4 Reel, 50 pay-line medieval themed video slot that provides players with lots of magic on the reels. The great griffin is a cross between an eagle and a lion. The wild symbol is the griffin that doubles payouts. Players get to see an ancient griffin flying across the screen scratching random symbols with his giant claws during the game.  These symbols turn into Wild Griffin symbols with winnings created by this feature being doubled. Players can choose from three options, namely a larger multiplier, additional free spins or a Pick Me Bonus Game.

Roxy Palace online casino also reported a big win by a player wagering on the slot game Lucky Charmer at the site. The symbols on the reels of this slot game which is themed on a snake charmer from India include cobras, king cobra and hot chilies.

Roxy Palace online casino is powered by Microgaming and licensed by the Lotteries and Gaming Authority of Malta.