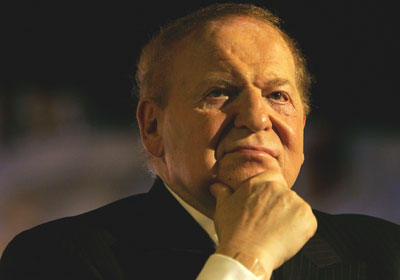 Sheldon Adelson, the world’s richest executive and chairman of the billion dollar casino chain, the Las Vegas Sands Corporation, has come out publicly against online gambling. Sheldon revealed that he believes that there is no secure available technology to prevent young people from wagering on the internet and he is therefore totally opposed to online gambling.

Sheldon met with Republican leaders last week and tried to persuade them not to support the introduction of a legalized and regulated online gambling industry in the United States and Frank Fahrenkopft, Chief Executive Officer of the American Gaming Association, confirmed the meeting.

Fahrenkopft revealed that he was told by Sheldon that he would be opposing any legislation to legalize online poker in the United States. Fahrenkopft added that Sheldon has had concerns about this issue for quite awhile and that he was perfectly within his right to make such a decision.

Ron Reese, a spokesperson for Adelson, reported that Sheldon’s viewpoint was not a reflection of the opinion of the Las Vegas Sands Corporation but was his own concerns about technology.

The American Gaming Association will continue to support federal legislation calling for states to be allowed to license and regulate online poker.