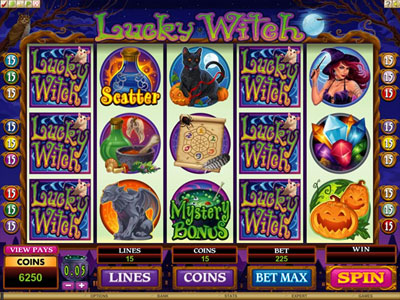 Lucky Witch offers players lots of exciting features and bonuses, including four different bonus games which each have its own entertaining and interactive mysteries and rewards.

Three or more Potion scatter symbols appearing anywhere on the reels trigger the free spins feature that awards players with 13 free spins.  A Witch wild symbol doubles payouts that get added to the scatter payouts which are then multiplied by the total bet staked.

When the Cauldron symbol appears on reels 1, 3 and 5 it activates the Mystery Bonus which is the basic bonus game and provides players with access to the other bonus games.  These are the Pumpkin bonus, the Potion Bonus and the Witch’s Vault and the Witch’s Spell Books.  These four bonus games offer players lots of special features, including a “win all” prize.

Those players willing to stake the maximum bet of $60 in this 5 reel and 15 pay-line video slot stand in line to win great rewards.

Players can have an opportunity of trying the Lucky Witch video slot game when it goes live in October at leading Microgaming online casinos which include All Slots and Jackpot City.