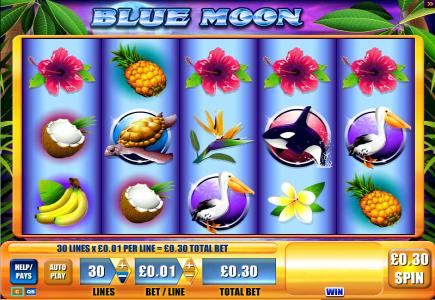 The new slot game features the Blue Moon Feature and is sure to provide online players with thrilling entertainment and outstanding rewards.  The game also offers 50 free spins that can be retriggered as well as 2 x multipliers.

The Blue Moon slot machine is also connected to the Jackpot Party Progressive Jackpot, which can be hit randomly at any time.

Players will find outstanding graphics with the Blue Moon slot game that includes magnificent images of fruit, lizards, flowers, turtles and two blue moons while the reels are spinning.

1,000 coins can be won by players who manage to get 5 of the same blue moon symbols appearing on one of the game’s pay-lines and 5 mixed blue moons on an active pay-line will earn them 500 coins.