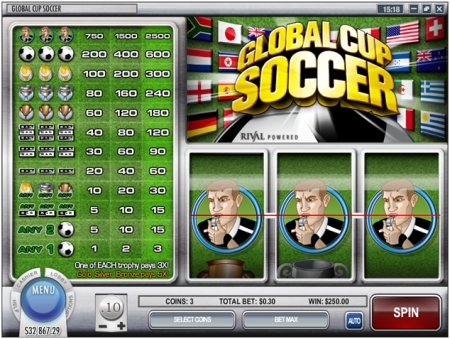 Many online casinos are expected to launch new games and promotions connected to the forthcoming FIFA Soccer World Cup event in the weeks before it commences in South Africa in June 2010 and Rival Gaming is no exception.

In fact, Rival Gaming recently launched a three reel slot game called Global Cup Soccer which is a very simple slot game with no free spins or wild symbols.  Above the reels of this slot game, against a background of all the participating countries flags, the name “Global Cup Soccer” appears while the pay table has a background of the soccer field and the symbols on the reels reflect a football theme.

This three reel slot game operates with a single payline and the coin denomination varies from $0.01 to $5.00 allowing players the choice of wagering between one and three coins.  The Referee symbol offers more than three times the payout with three coins wagered.

Global Cup Soccer will appeal to those online players who like to avoid risk as the slot game offers many small payouts.