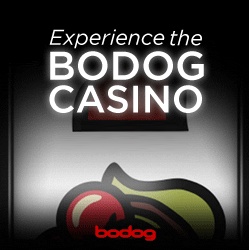 The brand of Bodog Casino that is owned by the Morris Mohawk Gaming Group has added twenty new games to the Bodog.com Online Casino and intends adding an additional few games during the next few months.

There are specialty games and video poker included in the addition although most of the new games are online slot games.  The new additions should appeal to players across the high as well as the low limits.

China MegaWild has a Chinese culture on the reels as well as a MegaWild feature and will probably attract many players.

Freaky Fruits has a Worm as a Bonus symbol – three of which initiate the Worm Races bonus round.

There are symbols such as a pirate, a compass, a ship, cannon and gold in the Pirate Slots game which is a classic three reel slot set in the background of an island.

Summer Dream has two thrilling bonus games namely Summer Girls and Shoppy Cheer and this game is bound to be the most popular of the new games at Bodog Casino.

New video poker variants such as Face the Ace, Shockwave Poker and Coliseum have also been added to Bodog Casino’s portfolio along with eight new specialty games such as Bingo Scratch, Soccer Shot and Lucky Wheel.

Players can play all the new games for free using the Flash software at Bodog Casino.