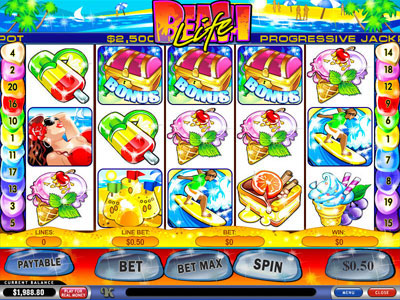 The seaside themed Beach Life Slot game offers players symbols such as a Surfer, a Treasure Chest, an Ice Cream, the Sun and pretty Girls on the reels of the machine.

The wilds, bonus and scatter symbols offer players top rewards with the Sun symbol being the wild symbol that replaces almost all the other symbols in the game in order to form winning combinations.  The sun symbol also pays out the highest single line jackpot of a whopping 100,000 coins should five Suns land on a winning pay line.

The Sand Castle is the scatter symbol and three or more of these symbols landing anywhere on the reels can trigger the bonus game in Beach Life, which is played on a second screen.

Players get to choose any three of twelve treasure chests and can win as much cash as is revealed therein.

Players are required to land five Sun icons on a maximum bet of $10 on the twelfth pay line of the game in order to win the progressive jackpot on Beach Life.

Beach Life offers players thirty one winning combinations and players can win some great rewards playing this game at casinos such as Windows Casino even if they do not hit the top progressive jackpot of $2.3 million.