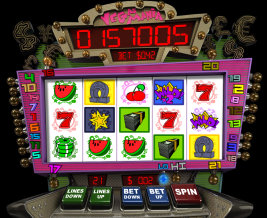 WinADayCasino.com is thrilled to announce that the online slot machine jackpot at its site was hit for a record-breaking 225,727 USD in the midst of the online casino’s third birthday celebrations towards the end of last month.

The lucky winner is an accountant who has decided to use the quarter million dollar jackpot to pay off his mortgage instead of spending it on luxuries.

Michael Hilary, manager of the no download casino stated that their progressive jackpot can be won at any time on any of their slots games.  He added that this lucky win is the fourth time that they have had a six-figure jackpot winner on the Vegas Mania slot machine and that Reel De Luxe and Wheeler Dealer, which is one of the games that they opened with three years ago, have had two big jackpot wins each.

Dereck O has been playing at WinADayCasino.com for approximately one year and until now has divided his playing time between Vegas Mania, Fair Tycoon, Leprechaun Luck and Tropical Treat.

The five-reel, 21 pay line Vegas Mania slot machine is the Game of the Month for July at WinADayCasino.com and players have an opportunity of winning up to $250 in a month-end draw merely by playing on the game.