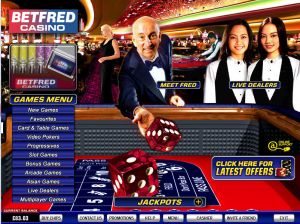 One lucky 52 year old online casino player from the South of England, known only as Brian, managed to haul in a huge progressive jackpot win at Betfred Online Casino last week.

Brian headed for the slot machines at the site to try his luck on the Pink Panther progressive jackpot slot game and was absolutely delighted when he realized that his investment of £500 in the game turned out to be a windfall worth over £100K.

Managing to spin £500 into £110,000 is an incredibly lucky feat. I could barely believe I was winning so much. This is my biggest win to date. I have given my sister some money and I will use the rest to pay off the mortgage.

After hitting the Major Pink progressive jackpot Brian hit 15 re-spins consecutively during the Wheel of Pink bonus game.  This hit earned him a 105 multiplier.

The Pink Panther video slot game was created by software giant Playtech and is based on the classic TV shows and films that was popular on the golden screens from the 1960s onwards.  The game offers two progressive jackpots and boasts five reels and 40 pay lines.  The coin denominations range from 0.01c to $5 and ten coins can be wagered per line.  Players will also find a gamble feature as well as an endless supply of bonus features.