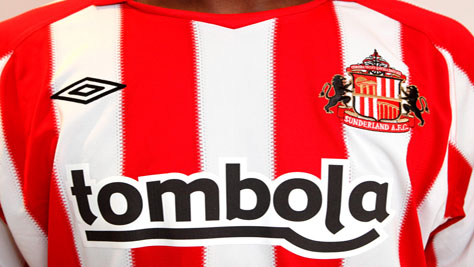 Niall Quinn, the football club’s chairman said “We are thrilled to be joining forces with Tombola at what is a really exciting time in our football club’s journey.  The company’s (Tombola) headquarters are in Sunderland so they know exactly what the club and the city are all about and we are excited by the possibilities this partnership offers to us both”.

Tombola’s significant share of the online bingo market will be increased tremendously due to the global exposure it will receive with its name appearing on Sunderland AFC’s new as well as away shirts in the 2010/2011 football season.  Tombola’s name will also be prominent within the home ground, the Stadium of Light.

Chief Executive of Tombola said “Sponsoring Sunderland AFC is a fantastic opportunity for Tombola.  With our own head office here in Sunderland we have been able to see the work that Niall and his team have done to transform the fortunes of the club.  We are really looking forward to working with Sunderland and we are confident that this sponsorship will help us achieve our own ambitions”.

Tombola Bingo is presently the biggest online bingo site in the United Kingdom and they are confident that this deal will see them become the number one online bingo and gaming provider internationally.